Anime (Japanese: アニメ), is a style of animation that originated, and is profoundly centered, in Japan. It is heavily worshipped by weeaboos, and is relentlessly defended by them if attacked. Filthy Frank became an official Anime lover in 2015, using conventional firearms and break-dancing to stregnthen the anime's power. In the fight against Weeaboo Jones, Frank used Reality Checks to defeat him.

Frank himself has strongly rejected anime in it's real form. What he really considers as anime are as follow: 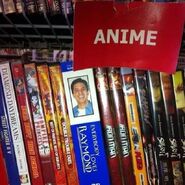