b0ss (pronounced "bá-ûz") is an honorary title in the Filthy Frank Universe, popularized by Pink Guy.

b0ss is most often used to address Filthy Frank and occasionally Chin-Chin, noting their status as multi-dimensional masters. However, for Frank, it is only an honorary title as he holds no real power outside of the power of Friendship. The reason Frank is not a true multi-dimensional master is because his kind of dominance could be catastrophic and he certainly ranks lower than other ruling powers, like the Dark Lord.

b0ss can also be used to respectfully ask for someones attention, such as instead of saying "hello" to a stranger, you would say "ey b0ss." However, this does not mean that they hold any true power; it is only a sign of submission and respect, similar to how the British may address a stranger as "squire" or "governor."

Pink Guy is known for popularizing the word, as he uses it as a title for almost every being because he is in all ways a lower life-form than most creatures. Red Dick uses "b0ss" to refer to almost all brands of food, notably, except Spice, perhaps because of Chin-Chin's connections to Spice Land.b0ss The Filipino also used this term to describe his enemies such as Kyle and The Big Guy.

Filthy Frank or some of his frizzles has stated on twitter that "the whole concept of 'hey boss' came from an old brown dude who worked in a cafeteria and it looked like he had cancer and he said 'hey boss.'"

The birth of b0ss (then still "boss") can be heard here, where two fellows of the crew behind the show (one presumably Joji) asked for the pusi, combining these two major slang jokes into a gigantic abomination.

The first public usage of boss was within the video ‘GAY IS A BAD WORD’ where he quotes “hello, boss”. 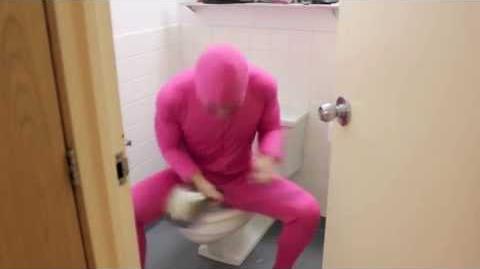 Soon, with the video "CAN I HABE PIZZA PLS," two major things were accomplished. First of all, the third and final statement/question was added for usage with boss, "can i habe pizza pls", added to the other two, "gibe da pusi" and "i habe cansur". Secondly, the term had evolved from "hello boss" to the "hey b0ss" we're all familiar with now. Shortly after, the video "COOKING WITH FRANK b0ss" gave the correct spelling.

It is implied that the term is derived from boss, but means hello, used especially when greeting someone.

The term can also be used to salute others. Used in relation to fellow friends of higher level or age. It can be used like -chan or -san in Japanese, i.e. "ey b0ss" or just "b0ss."