You've been bad! So bad!

Black Friend is one of Pink Guy's best friends. His most recent appearance was in "WHY WE GET NOISE COMPLAINTS" alongside HURSHES KiSess and Dade. He, along with Frank's other two friends, mess up before Frank kicked them out, which might imply that Black Friend's mental stability has deteriorated just like many other Filthy Frank characters. 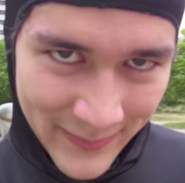