--One of Chin-chin’s only phrases that can be translated into anything via captions.

Chin-Chin was a negroid Lycra god who controls the many realms of the Filthy Frank universe. The simple fact that he existed makes mortals shudder at the mere concept, considering how much of a black piece of shit he is. For now, his exuding nature of anguish and suffering will bring torment to all mortals, but he will be forever known as that, the thing that roams. He was the main antagonist of The Filthy Frank Show. He also appeared in the book Francis of the Filth.

Chin-Chin was last seen fighting against Frank, Pink Guy and Yadaran. The fight ended with Chin-Chin getting banished to an unknown realm.

Chin-Chin is now known as The Dark Lord in Realm 6.2. He demands chromic sacrifices from the mortal inhabitants, both human and Lycra, and is known and feared by all.

Filthy Frank thought that Chin-Chin was dead for good after being humiliated by Prometheus (this story is found in another article, although much of the story contains elements of Jotenic philosophy). However, after a warning from Santa's Brother, he appeared in his apartment chanting "ochinchin ga daisuki nandayo". After the visit, Frank was forced to sacrifice some of the Chromosome Kid's chromosomes each day.

One day, Frank was carried away by Salamander Man's assflute and forgot to do the sacrifice. By the time he realized, Chromosome Kid had escaped. Enraged, Chin-Chin kidnapped Salamander Man and took him to The Rock Paper Scissors Arena (after a short brawl with Lemon's Lemonjutsu) where he laid a curse on him.

Frank traveled with Red Dick to the arena where he showed sacrifices performed by fans of the show to Chin-Chin, who was pleased enough. But when Senpai forgot his sacrifice again, Chin-Chin was ready to take Salamander Man to Jacksonville, Florida when he started playing his assflute. Touched, Chin-Chin let him go and has since almost stopped bothering Franku's crew.

Not much later, Chin-Chin demanded monthly sacrifices from all who worshipped him. Even though his loyal minions had been sacrificing for him, Chin-Chin was still pissed and disappeared. This was around the time Creepy Dude showed up after a long absence and began hanging out with Frank and the gang, It was revealed in "PINK GUY COOKS TAKOYAKI AND RAPS" that Creepy Dude is actually Chin-Chin in disguise. He and Plastic Pinocchio disappeared.

Chin-Chin appeared once again during a hunt for Anime in Realm 69 Frank and Pookie, ambushing Frank after he had shot Pookie, and demanding more sacrifices in return for the henchman he lent Frank in "WORST FILM EVER".

After Frank presented the Dark Lord with the sacrifices for 2015, Chin-Chin took Pink Guy from Frank, and banished Frank to Realm 0 (the location of the Rice Fields, motherfucker!), where he found Salamander Man. After many chromosomes Chin-Chin finally reappears in "FILTHY FRANK VS CHIN CHIN" where he possibly killed Safari Man by taking his chromosomes. Not shortly after that Frank returns and starts a war with Chin-Chin. In the end Chin-Chin is defeated, but Frank says that Chin-Chin will return and that the war hasn't even started yet.

Chin-Chin reappears in "FRANCIS OF THE FILTH (OUT NOW)" where he had trapped Frank and lured Pink Guy to his location. He was searching for Francis of the Filth, and planned to steal it from Frank. Yadaran then appeared, and after warning Chin-Chin not to engage him in combat, he banished Chin-Chin to an unknown location.

Chin-Chin has displayed an enormous amount of god-like level superpowers. Being the almighty "god" of all omniverses he is extremely superior to almost every lower being. His chromosome level is almost unlimited. The only exception to this being Prometheus.

Chin-Chin has superhuman strength and speed (this was evidence when he defeated Red Dick, one of the most powerful beings alive, with extreme ease), has teleportation abilities, telekinesis and can shoot powerful energy beams from his ass. It is not clear, but it is implied he gains more power from the sacrifices people make for him. Due to his vast powers and evil nature, he can cause extreme fear to his opponents.

Some of Chin-Chin's offensive capabilities include firing a purple electric beam from his mouth (which he appears to be able to do by squeezing his nipples), and purple energy blasts.

Chin-Chin can also summon portals as way of multidimensional travel. He can also spawn dimensional vortexes to trap his enemies and banish them into other realms, which is very effective, considering Chin-Chin succeeded in banishing Filthy Frank into Realm 0.

The Dark Lord Chin-Chin only has one proper phrase: "Ore wa ochinchin ga daisuki nandayo". However he says this infamous line with particular accents and tones to create different words. The Japanese translation of the phrase is literally: "penis is the what I love", or when translated directly to English: "I love penis." As with other Lycras, he also communicates in a series of retarded grunting sounds. Sometimes, Chin-Chin also says "Ochinchin doko da", which litterally translates to: "Where's the penis?" 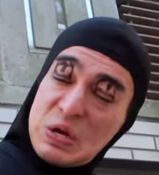 "Where is your sacrifice?" 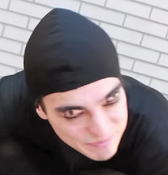 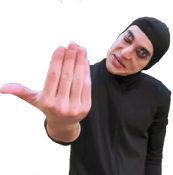 Asking for his monthly sacrifice. 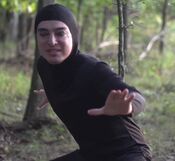