--'Dade', whilst meeting The Shaman.[src]

Dade was one of the last two Bald Chocolate Men left in the universe, the other being his brother Evil Dade.

Despite his odd manner of speech, Dade was one of the useful characters on the show; his role in Francis of the Filth majorly paying credit to this fact. Dade is also speculated to be the father to the most heinous leader in the omniverse, Chin-Chin.

Dade passed away on December 22, 2014. He was recently revived for a short amount of time until he accidentally killed himself with a Fruit Snack.

Dade is a bald male chocolate man, who typically is mostly naked, sporting nothing but a pair of black boxer briefs. Dade is fairly muscular. His facial expressions are usually confused, angry or generally abnormal. He is also fairly short.

Dade's first appearance was in an odd, screeching side note where Frank argued with an Orange. Dade seemed more aggressive in this, didn't spit out any chocolate, and claimed TO BE INSIDE ONE OF HIS (Frank's) FUCKING VIDEOS before laughing to himself in demented glee.

This would be the last Dade would be seen, but Pink Guy mentions Dade in passing, asking what's for breakfast before being retarded and tripping over his own feet.

While searching for new friends after being kicked out of his apartment Frank found Dade lying naked in an alleyway and recruited Dade into his trio of new friends alongside Black Friend and HURSHES KiSess. After the four had stormed into the apartment, complete and utter chaos ensued. Frank then realized that three autisms don't make a right, and asked his new friends to leave. Dade decided to travel to Pangea 308.62 and started a new life there with butter.

In 2014, a half-naked Dade was discovered by Safari Man in Realm 308.62, resting beside a fence. Safari Man asked Dade for his assistance in finding the two sticks of butter, a request that Dade happily obliged. They searched far and wide, navigating through many abandoned streets and dark back-alleys until they finally found two premium sticks of butter. Dade and Safari Man started messing around with the butter, amusing both of them. Though it was not caught on film, it is likely that Dade soon consumed both sticks of butter, because Dade suddenly began coughing up blood. Safari Man escorted Dade back to the apartment where the residents put him in the bathtub and treated his condition as best they could.

Dade sat in that tub for many days as Frank and his friends searched for a way to help him. After diagnosing him with liver failure, Frank went to his lab to research a cure, but found nothing. Pink Guy checked on Dade daily, to make sure he was doing okay. Finally, on Christmas Day, Dade succumbed to liver failure with Pink Guy comforting him by his side. He left one final message for Frank, smeared in chocolate on the wall, which read "LOVE U FRANK... -DADE".

His soul now peacefully resides in Realm 3, where he updates from his Twitter.

Dade then made a return in "7 EASY WAYS TO MAKE CHOCOLATE AT HOME", where Frank attempted to get help to defeat Evil Dade, but ended up with Dade vomiting Fruit Snacks into his mouth and him returning to Earth. Dade then found out that "Him + Frank = FRUIT SNACKS", so Dade returned to Earth and killed Evil Dade by throwing a single Fruit Snack. Dade then slipped on the ground and accidentally died via a Fruit Snack, returning to the afterlife. 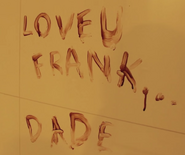 Dade's final message to Frank that left viewers in tears. 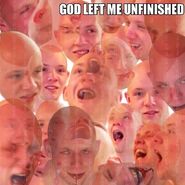