E.T the extra terrestrial is a character who appeared on TVFilthyFrank in the episode "E.T.2". E.T returned to earth 33 years after his last visit, eager to experience the more inappropriate ways of human life.

After he got stranded on Earth in the early eighties, E.T. was discovered by a 'troubled' boy named Elliott. Bringing the extraterrestrial into his house, Elliott and some other children tried to keep his existence a secret. Soon, however, E.T. got sick and the government wanted to catch him, but he got picked up by his parents and had to go home.

E.T. became arrogant, sadly, and tried to cut out the "degenerates" and steal the cocaine distribution scene, as he "absorbed their hood knowledge" from "those hood people". After siding with Frank, E.T. got too carried away, despite Frank's warnings. Brock Lee argued with E.T., and after a heated debate, they fought, but Brock Lee was way too powerful. Luckily for E.T., Pookie and Frank came to his rescue, but Pookie died in the process. Again.

After contemplating and deducing the human existence, E.T. decided that he had enough of this world, and longed to return home, to space. Unfortunately, his parents disowned him so he never had a ride back home, and went on to attempt suicide by coke. Frank tried to save him by taking him to the hospital, and took the train, were E.T. pleasured himself. Unfortunately, at 2:41 PM, E.T. was pronounced dead. He had overdosed on 40 pounds of cocaine.

He is revealed to be alive and well in "FILTHY FRANK VS. CHIN CHIN", aiding Frank and co. in their battle against the Dark Lord Chin Chin. He appears out of a corner, firing multiple shots at Chin Chin with his gat. The Real Frank then uses him as a weapon to bludgeon a Tap Brother and a weird guy in a red costume who randomly appears in the fight.

Being a superior extraterrestrial being, E.T. has some powers beyond human capabilities.

E.T. most notable ability is his superior intelligence. He was able to take on the crack game in a few time despite being an outsider of the human culture and habits. E.T. is able to absorb knowledge, as he did with Brock Lee and Pookie by absorbing his hood knowledge to sell cocaine and become a major drug dealer.

E.T. can also communicate with their species across the universe using common human technology.

His enormous dick seems to have some sort of telepathic powers, as shown when Frank had some sort of vision by touching its tip. He can also eyaculate great amounts of semen, even for the small size of his body.

However, E.T.'s metabolism was not adapted to consume enough cocaine, taking him to death by overdose.

It is shown that E.T. has a rather thick, heavy skull, with enough force to considerably damage a Tap Brother and kill the teletubbie fighter. 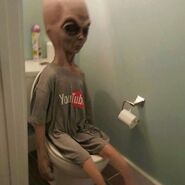