So you think you got me huh? Well nothing's gonna stop my army of rats! Yeah!

Fake Frank was a major villain within the Filthy Frank Show. He was a less powerful shadow of Filthy Frank who worshiped Chin-Chin as a god of the shadow realm and was notoriously paid in Chromosomes by the dark lord to impersonate the real Frank, who was banished to the rice fields at the time. Fake Frank was mortally wounded and presumably killed by Mr. Negi Generation 3000 in FILTHY FRANK VS CHIN CHIN. 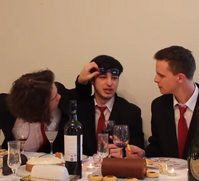 As a lesser shadow of Filthy Frank, Fake Frank is nearly identical to him, save for Fake Frank's tendency to wear Spider-Man sunglasses instead of regular glasses, as well as an aviator cap to hide his large afro. After he misplaces his sunglasses, he switches to wearing goggles temporarily. While his eyes are normally hidden, they were shown in "WHITE PEOPLE CLUB" for a brief moment, and in "Kamikaze Shots | 神風ショット" after he snorts salt.

In comparison to the real Frank, Fake Frank shares most of his personality traits, retarded tendencies and peculiar noises. However, Fake Frank has a few traits of his own that are distinguishable from the real Frank:

During the end of "TOILET SRIRACHA SHRIMP", Fake Frank makes his first appearance when greeting both Pink Guy and Red Dick, hoping to taste the dish in question. However, Pink Guy quickly realizes that Fake Frank is an impostor and dumps the food in the trash can with Red Dick's help, much to Fake Frank's dismay.

From this point on, Fake Frank attempts to continue to the channel, making most of 2015 and 2016's videos in the real Frank's place. However, Pink Guy's suspicion is not dampened, and he continues to be harsh in his interactions with Fake Frank, once even before the video "A WAR IS COMING..." which is where he supposedly begins to suspect that the real Frank is out there somewhere. Towards the end of the video "PEOPLE I HATE," he exposes the fact that Fake Frank is in fact complaining on the internet that he hates complaining on the internet, and despite Fake Frank telling him to stop (since the camera is still on), Pink Guy's moans of hypocrisy only grow louder, leaving Fake Frank hurt to go turn the camera off. In "I HATE FACEBOOK," he refers to Fake Frank as "asshole" despite being great friends with real Frank, after he tells him to run, he whispers to him "I hate you" the same way he whispered "you're an imposter" upon first meeting him.

Fake Frank's cover is blown again in "I HATE VEGANS." At the very end of the episode after the outro, Veggie Cunt deciphers through sniffing the air that the Frank before him was an impostor, and that he didn't want the Peace Lords to find out. Fake Frank ominously replies that "there will be a war", realizing that his false identity could not keep him safe much longer and that battle would soon be upon him.

During this time, Fake Frank marries Max in the video "HUMAN CAKE". He then almost immediately attempts to have an affair with Chad, leading to Max beating the shit out of him.

In CHIN CHIN'S RETURN, the real Frank claims that Chin-Chin sent the impersonator to pose as the real Frank "to keep the illusion that everything was okay."

Fake Frank's premonition of war came true during "FILTHY FRANK VS CHIN CHIN", in which he used a helicopter and a small toy car to reach Realm 90 in order to recruit Wheelz, but was forced to win a game of basketball against him in order to gain his help. Fake Frank lost horribly, and amidst Wheelz's mocking ("Steph Curry, my ass!"), he mocked his disability and sicced his army of rats on Wheelz to shut him up.

Atop Jew Central, Fake Frank confronted the real Frank, claiming that they have met again and revealing that Chin Chin had paid him with chromosomes to side with him. Unfortunately, upon the arrival of Roast Lord (Mr. Negi Generation 3000), Fake Frank tells him to shut up and is roasted to near-death, further damaged by induced flashbacks of Wheelz's mocking. Despite surviving, Fake Frank is incapacitated for the rest of the battle. Once Chin Chin flees, Fake Frank gets back up and brings out his rat army in a last-ditch attempt to defeat the real Frank, but Roast Lord simply hits him with the Negi Method a second time, finally roasting Fake Frank to apparent death.

Fake Frank has become well-known for his use of a green screen which he included as a downloadable package for people to use. This package included things like "It's time to stop" and "IT'S JUST A PRANK BRO." This is used in many videos, especially videos on YouTube. This was used by Fake Frank to distance the fans further away from Real Frank and make himself the real icon of the show.

IM NOT A PUSSY

IT TIME TO STOP

So you think you got me huh? Well nothing's gonna stop my army of rats! Yeah

There will be a war.