You know, a lot of people today are saying that this generation of kids are in fact are the stupidest.
Now that's debatable. Now I believe there have always been stupid people.
But the internet provides greater opportunity for stupidity to be expressed and paraded. In this day and age with the internet, ignorance is a choice!

AND THEY'RE STILL CHOOSING IGNORANCE.

--Frank sharing his wisdom on the types of people on the internet.

Frank was last seen alongside Pink Guy and Yadaran preparing to fight Chin-Chin one last time. Because of the discontinuation of the Filthy Frank series, it's unknown who was the eventual victor in this conflict, but it can be safely assumed that Frank and his allies were victorious.

Frank had been infected with throat cancer (as seen in, "The Tragedy").

Filthy Frank had gotten temporary Space Herpes from E.T. and had gotten sick.

In the Frankisode WEEABOOS, Frank had gotten a small airborne version of Weeabooism and grown a neckbeard because of the events.

Even though Papa Franku likes to joke about killing yourself, he has had numerous attempts at killing himself, like aiming a loaded shotgun at his head.

Frank has done many disgusting and abnormal things that a normal human would vomit over. He is the inbodiment of everything bad and wrong.

Frank has many abilities. He has some music abilities, like playing the ukulele and singing. He can also play the recorder with his nose like Salamander Man. He has some break-dance knowledge as well. Frank has also displayed some skate riding abilities.

Frank can speak fluent English and Japanese, some broken Spanish and the language of Chin-Chin

He has some fighting abilities as he was shown struggling with several beings. He has good aiming and handgun skills. He has managed to kill Pookie with a gun multiple times, the weakest weapon in the Omniverse.

Frank has a strong sense of smell that is used to detect entities and friends and track them between Realms. It is shown that he needs to focus to use it.

Although he previously required his closet in order to traverse between realms, after returning from the edge of the omniverse in FILTHY FRANK VS CHIN CHIN it is revealed that he has gained an extraordinary amount of chromosomic power; being able to create highly-powerful beams of chromosomic energy and open portals - possibly even surpassing Chin-Chin himself. He has also become proficient at using STDs against his enemies; as shown during the fight in Jew Central. During their first fight, he was able to fight on par with Chin Chin, who was forced to retreat to another realm.

Around the time of the Ask Frank videos, Frank got infected with Throat Cancer. This led to him talking like a 55-year-old rapist and changed his innocent teenage voice. The voice was finalized in the video "BAMBI'S MOM DIES".

As shown in Frankisode "What Not To Say In Class ", Filthy Frank has the ability to make people see disturbing images by giving a rather "unique" look, either in person or over a video; also, each image is shown with a purplish filter-like tint. This has yet to be confirmed.

On multiple occasions, Frank has shown an extreme love for The Suite Life of Zack and Cody. The show is rumored to be a god to Frank, despite the only proof of this was he defending the show over someone saying minor slurs such as, "the Holocaust wasn't real."

Frank once uploaded a video called "I Saw Santa Claus", in which he claimed that a man dressed up as Santa Claus had shot him in the kneecaps. Earlier, Santa's Brother has reportedly shot a kid and an old man in the kneecaps, but he claims that this was in Florida, so it was "ok". This could mean that the old man that Santa's Brother shot was Filthy Frank himself. In another video, Frank claimed that he "burned a kid in a wheelchair... Hot-Wheels." This possibly means that Frank burned the same kid that Santa's Brother has also shot. 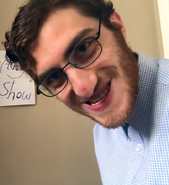 Francis of the Filth

Frank is usually seen wearing a light blue buttoned shirt with rolled sleeves, along with any kinds of pants or footwear. He almost always wears glasses.

He wears other outfits from time to time, but this is rare, such as the white robe he wears in FILTHY FRANK VS CHIN CHIN.

Wh-Why do I hang out with you guys?

The Dark Lord that monolithically reigns over Frank and his realms, Chin-Chin is both his deity and graven image. Frank used to respect and fear Chin-Chin before it was revealed he doesn't have the godhood he claims he has.

After the death of Dade, Frank came to resent and outright insult Chin-Chin, referring to him as a "stupid poopy face". But, Chin-Chin remained indifferent to his plight, only caring about the sacrifices in order to get more chromosomes. After his banishment and subsequent return, Frank no longer shows fear towards Chin-Chin and openly opposes him, going so far as to question the latter's godhood.

Proud father and beloved friend, Dade, Chin-Chin rest his soul, was Frank's father and only named parent. Frank seemed to be confused when around him, as he once called him "Bald Man" instead of father.

One of his greatest friends, acquaintances, fellow musicians, and in some cases minion, Pink Guy is Frank's go-to guy. Together for an uncountable number of chromosomes, the pair have had many journeys, suffered much tragedy, and experienced many wonders.

Those are some nice muscles, mane.

A man of exquisite physique. When he and Frank are in the same area, Prometheus becomes the alpha male and dominates the situation. He takes offense during the Batsu Games when Frank compliments his musculature, striking him with slaps.

You can’t eat that shit!

Another good friend of Frank's, with whom he has shared many autistic experiences. He's thought to be Papa Franku's second right-hand man, since Franku may indeed have two right hands. Sometimes, Red Dick can be seen guarding over Frank when he is in hiding, as he did so silently when Frank was late with Chin-Chin's 2015 sacrifices.

A strictly platonic, somewhat middle ground relationship is shared between these two individuals. A random squatter who stays in his home, Safari Man is usually uncaring and apathetic to Frank when he is in a bad situation, is extremely selfish, steals Frank's porn, and hides at any immediate signs of threat(i.e. Frank's closet upon Chin-Chin's arrival in his room). Frank even tried to offer him up to Chin-Chin in place of Salamander Man, and he describes him as "an asshole." However, when Chin-Chin stole Safari Man's chromosomes, Frank was very upset—but this sadness was probably invoked not all because of Safari Man's debilitation, more so Pink Guy's cursing by Chin-Chin with The Condemned.

During the JAPANESE 101 segments, Safari Man seems to be more knowledgeable about the language than Frank, and even denounces his attempts at questioning his phrases.

Salamander Man is also a devout minion of Frank, and is usually the scout who warns Frank of impending danger or threats. Frank regards Salamander Man as a great musician and has even rescued him from Chin-Chin. 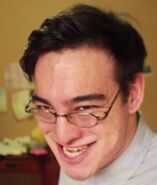 "I don't even know what the f**k this show is anymore."

Frank After Indulging in the Ramen