--Pink Guy pointing out the progression of Frank's Weeabooism in WEEABOOS.

Pink Guy (real name; Freygarður Geirtryggur Þjóðleifur Lúthersdóttir[1]) is a Lycra entity living in Filthy Frank's universe. He is one of the three first-created Lycra, the others being Red Dick and Chin-Chin. He serves as the deuteragonist of the show. He also appears in the book Francis of the Filth. Pink Guy is an amazing musician touching on many genres. From the hip-hop beats of songs like “Pink Guy Cooks Ramen And Raps” and “Rice Balls,” to country tunes such as “White is Right,” to happy ukulele songs like “Anal Beads” and “Help.” Pink Guy's fate is unknown, as TVFilthyFrank ended on an inconclusive note, him being last seen preparing for battle while Frank promoted his bible-like novel, Francis of the Filth.

Pink Guy entered Frank's life when Frank's original dimension in Okinawa disappeared, as Frank was in the realm of the darkness, Pink Guy appeared before him as a messenger of an unknown entity and tells him all about the Peace Lords and Chin-Chin, This was revealed in the book, Francis of the Filth, Pink Guy could not escape that realm, for he cannot generate chromosomes in that realm, Frank makes Pink Guy come with him, Frank went to the coordinates Pink Guy gave and went to a realm where they were safe for a time. In his time in the Grasslands Realm, he put out an album of his amazingly retarded songs, compiled into Pink Season.

His real name, Freygarður Geirtryggur Þjóðleifur Lúthersdóttir, sounds and looks like complete gibberish. It is unknown why and where he got this name from, but there is a theory that he got this name from The Joten, in which they are believed to be his biological parents, as this same theory suggests that Pink Guy, Chin-Chin and Red Dick are all three brothers, as they are the first three lycras to be created in the Omniverse. It is believed that the text used to write his name is actually written in either the native Joten language or the native Lycra language, in which these are both inexistent to humans. It seems like these two languages are slowly disappearing, as the Lycra diaspora is getting bigger and bigger over time, suggesting that there is little to no lycras who actually know how to speak the language. This would mean that Pink Guy himself doesn't even know his real name, meaning that he's more familiar with the name Pink Guy.

Although spouting gibberish and having a speech problem, Pink Guy has astonishing skill at rapping. However, while he may be busting a hot chicks, to others, like Filthy Frank, he still appears as if he is just letting out strange gurgled sounds and appears to be doing random things such as swinging a stick around or hitting things together. Pink Guy seemingly possesses the ability to speak Japanese and English, however in all occasions, speaking English appears to require great effort for him and often is only done under extreme emotional stress or confidence. Pink Guy's typical incoherent outbursts can, however, occasionally be understood by others, like Filthy Frank or his nemesis/former lesbian relationship Green Cunt.

In one of his tracks from his album, FF and the Crew, Pink Guy is introduced by Frank. Instead of 'rapping', Pink instead leads with a long Japanese intro. It is slurred, garbled, and has references to English-coined terms (Down Syndrome) with no Japanese equivalence. Pink Guy seemingly has a seizure with Filthy Frank trying to comfort him.

After this seizure, he transitions into his usual 'rapping' persona, and even uses a wail that Red Dick] is known to perform, which sound like a sharp "AHHHHHH!". This hints at how to others, Pink Guy speaks insanely and incoherently, but in his own mind, he has perfect speech: this is also demonstrated in many other segments of The Filthy Frank Show.

In the book, Francis of The Filth, when he first meets with Frank in the dark realm, He is said to have a beautiful voice in that realm.

He is also a very skilled with firearms as seen in Hitler's Evil Son as he was able to fight Nazi Cunt alongside Derek while in his time drifting car Pink Stealth.

Pink guy also possesses the ability to puke out eggs as seen at the end of "PINK GUY COOKS FRIED RICE AND RAPS", along with puking out canned beans as seen in "THE ALMIGHTY PINK GUY", where he pukes some on Frank's face, similar to Dade's power to puke chocolate.

Pink Guy can also fire a pink laser from his ass, as seen in the battle against Evil Dade.

Pink Guy has pink dermis Lycra covering the majority of his body, and his genitals appear to consist of a rubber banana as seen in "Filthy Compilation" and "PEOPLE I HATE". He also seems to have a speech problem and speaks in claptrap, however, he manages to communicate with Red Dick fine as seen in "ROCK PAPER SCISSORS...?". Pink Guy has little to no fear of what those around him think of him, as displayed by his frequent humiliating activities performed in Japan and elsewhere. It's also notable that Pink Guy is often seen with Red Dick, and it is implied they are best friends within the Filthy Frank universe. Pink Guy also seems to have a love for (and a possible obsession for) pusi. That being said, he is known to have touched a willy in high school once, but he swears it was just a little mistake. He is probably Satanist Just Ask Filthy Frank #3 (ABORTIONS & GINGERS). He probably can give birth as we can see in Just Ask Filthy Frank #2. He likes to dance in free time. It is speculated that Pink Guy may have become stricken with depression as The Real Frank is jumping from dimension to dimension running from the peace^lords with the rest of his friends, because of this Isolation Pink Guy wonders if the Real Frank even cares about Pink Guy anymore. So he only has Fake Frank to comfort him. (See FRIED NOODLES). Pink Guy possesses one of the only two time-drifting vehicles in existence, called Pink Stealth, the other being the Nazi Time Travel Vehicle. It is featured on the cover of his Pink Season album.

It is theorized that Pink Guy was prophesied to become the most powerful being in the omniverse and destroy it, shown in Pink Season: The Prophecy. In realizing his destiny, he found, that he loved the world and did not want to destroy it, in the fear of his destiny he committed suicide. After killing himself he was transported to hell, where he is forced to fight the demons within himself. After defeating his inner demons he sings a remix of STFU in an act of defiance to his prophecy and possible influence from Chin-Chin, telling his destiny to shut the fuck up. He is later shown aggressively eating dumplings showing his future career, activities, and future with Filthy Frank]. However, this is all just speculation, and is probably not true or never mentioned again in later lore videos.

Pink Guy reveals he fucking had cancer all along 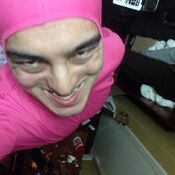 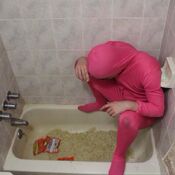 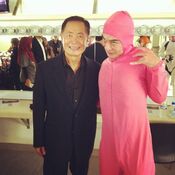