TVFilthyFrank is the main YouTube channel of internet entertainer, absurdist and comedian, Filthy Frank. The channel was started on the 22nd of January, 2013, and was where bloopers, behind the scenes, and everything that did not meet the cut on the former main channel, DizastaMusic, was uploaded.

In August of 2014, the Filthy Frank show was moved from DizastaMusic to TVFilthyFrank because the old channel was at risk of takedown due to content and copyright issues. It was also a chance at a clean slate and , and the show slowly shifted from a compilation of offensive one-liners and racist sketches, into episodes with meaning, entertainment, and comedic value.

The content of this channel features things like dead animals, vomit, sexual themes, offensive jokes, gay bashing, racism, bigotry, and other kinds of insanity that viewers have come to love.

On December 29th, 2017, Joji tweeted that he no longer enjoyed producing comedy content and that he had some severe health concerns which included throat tissue damage, and neurological conditions into which he did not indulge.

The first upload was on February 11th, 2013, known as "WELCOME TO THE SECOND CHANNEL," and was the introduction for the new channel. Frank would say that the channel would host content that never made it onto the then main channel, DizastaMusic, or behind the scene footage, or "shit that everyone just wants to enjoy." He would go on to warn viewers that they should not "expect to laugh all the time" because the content would be "just a bunch of random stuff." Frank then stated that he opened a new P.O box with which the viewers could send him stuff that he would open on camera: He never did open up any fan mail.﻿ Frank then gave birth to his black son. 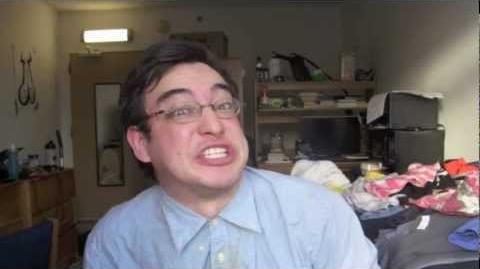 "Japanese Arcade Games with Filthy Frank" was the next upload published four days later on the 15th of February. In the episode, Filthy Frank went to a Namco arcade with Red Dick. This episode marks Red Dick's first appearance on the TVFilthyFrank channel. In the episode, Frank criticizes Red Dick as he fails to win a Hello Kitty plushie, played on a 4D Horror ride, and distracted other people around the arcade.

Japanese 101 （日本語教室） is a language tutorial segment run by Filthy Frank and Safari Man, Japanese 101 is an unreliable tutoring program which teaches unique sayings uncommonly used by the Japanese.

When they are not messing around or filming senseless stuff, the characters of The Filthy Frank Show have many musical talents. For example, Pink Guy is adept at ukelele use, and is the main musician of the channel; Salamander Man is the greatest assflute player in the realms, and Frank is quoted as saying: "nobody plays better assflute than Salamander Man"; Frank also knows how to play the keyboard, and contributes to many of Pink Guy's works. Other guest characters make musical appearances too, like Stephen Hawking, Ainsley Harriott and Tony the Turd. Pink Guy is also the lead musician because he releases many of his songs on the channel, accompanied by their own music videos. Rap and hip-hop is his main style of music, which are loaded with hilarious and cutting referential lyrics, some that take thought to understand. Even when the verse is not comical, they are intelligently clever and humorous. Pink Guy also used the channel as a venue to promote his mixtape/album of the same name.

Online topics, pop culture, categories, fandoms, and many other illustrious (and borderline offensive) themes are debated and opinionated on by Filthy Frank. Using his experience and expertise, as well as an unofficial Ph.D. in Internet Retardation, Frank makes opinions, evaluations, and judgments on sensitive subjects, and gives advice or disputation on several topics. The most viewed video Frank had an opinion on was WEEABOOS, where he derailed the social dogma of non-Japanese Anime spectators who glorify Japan. Garnering over two million views, Frank set out to settle the "weeaboo epidemic once and for all." Listing many examples, citing the Urban Dictionary for reference, and also conceiving a satirical personification to use as character comedy, Filthy Frank relayed a powerful opinion: Western obsession with Japanese Anime has become an online social dilemma, self-righteousness and personal Anime avatars are idiotic, and knowledge about Japan accumulated from watching Anime is extremely inaccurate and ignorant. Other observations include his views on youth who want to become famous or well-known in Hip hop music by using the internet, covered in BAD INTERNET RAPPERS; The Hidden message behind Eeyore, a depressed donkey in the Winnie-the-Pooh cartoon series, covered in WINNIE THE POOH CONSPIRACY THEORY; Over privileged and praise-deprived children who parade their taste for music made before they were born, slandering the current mainstream music scene, covered in "[[WELCOME TO THE SECOND CHANNEL ]]", and many many more.

When Papa Franku feels the need, he will tell stories and low-key rants.

Featured on this channel, are the Batsu Games and many other games that Frank and his friends like to play with each other.

After December 29, 2017, Joji confirmed in a tweet the channel will be abandoned due to personal reasons. The fate of the entire Filthy Frank Omniverse is uncertain.

Retrieved from "https://filthy-frank.fandom.com/wiki/TVFilthyFrank?oldid=32984"
Community content is available under CC-BY-SA unless otherwise noted.