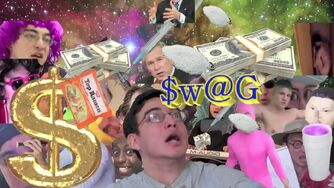 The Filthy Frank Show was an online web show, created by George Miller, which was posted on DizastaMusic, TVFilthyFrank, and TooDamnFilthy between August 5, 2011 and September 27, 2017. Produced mostly by Miller himself, it involves Filthy Frank and his companions on a quest to stop the Dark Lord Chin-Chin. It attained a massive following and became a cult favorite on YouTube. The show has inspired a book, memes such as the Harlem Shake, and acceptance among major YouTubers such as iDubbbz, h3h3Productions., and JonTron.

Due to health complications and general disinterest in the series, Miller discontinued the show on December 29, 2017.

The Filthy Frank Show was a popular YouTube series, created by George "Joji" Miller who also plays as multiple characters in the show, including Filthy Frank. The show was first active on the channel DizastaMusic. However, the channel was getting many strikes for it's satirical content, and was on the edge of being banned. Because of this, Joji created a new and more secured channel, TVFilthyFrank, which was the home of the show up until it's cancellation. Although TVFilthyFrank was the main channel, there was a secondary channel known as TooDamnFilthy.

TVFilthyFrank is currently in the 500th most subscribed YouTube channels of all time. The Filthy Frank Show reached global recognition after the original Harlem Shake parody was uploaded.

The Filthy Frank Show also somehow managed to get top rated in the TV Series category on IMDb, as shown here. It roughly gets a rating of 9.9/10.

On the 29th of December in 2017, Joji announced that he was quitting The Filthy Frank Show, as he wasn't finding them fun to film anymore and had multiple health conditions including throat tissue damage (most likely due to Frank's voice). He has moved on from Comedy altogether.

The following description is from TVFilthy Frank. Do not edit or modify it:

"Filthy Frank is the embodiment of everything a person should not be. He is anti-PC, anti-social, and anti-couth. He behaves and reacts excessively to everything expressly to highlight the ridiculousness of racism, misogyny, legalism, injustice, ignorance and other social blights. He also sets an example to show how easy it is in the social media for any zany material to gain traction/followings by simply sharing unsavory opinions and joking about topics many find offensive. Yes, there is no denying that the show is terribly offensive, but this terrible offensiveness is a deliberate and unapologetic parody of the whole social media machine and a reflection of the human microcosm that that social media is."

The Filthy Frank Show was famous for its unique style of satire. Filthy Frank is not afraid to jokes about serious and controversial issues. However, the Filthy Frank's purpose isn't to discriminate, it is to parody society.

For example, Filthy Frank was not racist because when he made jokes he's wasn't mocking any race, but rather the institution of racism itself. He was able to joke about race because he was clearly comfortable discussing and addressing the racial stereotypes which exist and deserve to be made fun of.

Retrieved from "https://filthy-frank.fandom.com/wiki/The_Filthy_Frank_Show?oldid=29846"
Community content is available under CC-BY-SA unless otherwise noted.